The ISG Finance Association Invited to Round-Table Session on ‘BREXIT’

The ISG Finance association had the honor to participate in a round table conference on the subject of ‘Brexit’ on Wednesday March 29, 2017. This was an event organized collectively by the Center of Financial Professionals, the French Banking Federation, the French Association of Financial Management, the French Federation of Insurance and the Paris Europlace. 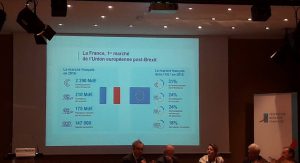 All the members of the ISG Finance Association were present to address the following topics:

The session was formally started by an introduction from the President of the Center of Financial Professionals (CPF), Mr Michel Pébereau.

The other members also present were :

-Marie-Anne Barbat-Layani, General Director of the Federation of the French Bank

-Bernard Spitz, President of the French Federation of Insurance

In line with this, we would like to feature our professor that teaches Law, Mr Renaud Labbé , that brings much knowledge on this subject-matter to our students at ISG!